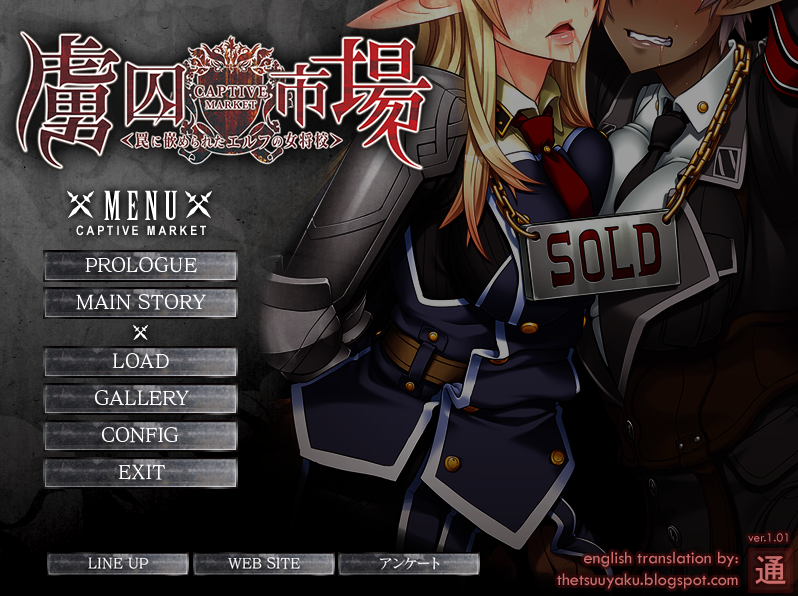 So. As we all know, a captive market is a market in which potential customers are forced to either purchase from a single supplier or go without. This can be due to a lack of competition, what competitors do exist having high prices, or the seller owning the buyer. True to it’s name Captive Market is about establishing a monopoly on the sale of big titty elves and eventually conquering the market.

That’s a lie. This is actually a VN from 2012 about REVENGE! And it’s the best kind of revenge! The kind where you defeat someone much more competent than you via cheating. Captive Market takes place on the continent of Celtoana. Celtoana is split up into 3 countries. Red and Blue are idiots and have been fighting each other since forever while the little green one was smart enough to start selling guns and tanks to both sides. You play as Anime Mc-Armless. The protagonist is named armless because he loses it when he get his ass beaten in battle by blonde elf skank due to the fact that most of his soldiers were elves and therefor shit at fighting. Then he gets kicked out of the army by black elf skank for the petty crime of slave trafficking. Apparently that’s against the elf whore/human Geneva Convention or something. Clearly the MC is not the one at fault here.

Anways, skip ahead a few years and Armless is working as a mercenary. Blue and Red are considering peace talks. This is bad news for Green. Green hires armless to capture Blonde and Black and break their minds  so they can fuck up the peace talks and continue to profit. Blonde gets captured via a hypnotized friend and black gets captured via cheating. Now that armless has both captured the mind breaking process begins.

Enough plot synopsis. How’s the game? Well it’s a good time but it’s not a game. It’s a VN. I don’t mean a VN like Sunrider Academy where you at least have some stat management mechanics either. This is a straight VN. It’s a story with around a dozen choices you get to make during it. These aren’t important choices either. They’re mainly about which order and how to fuck your new Elf toys. That being said, the story isn’t completely pointless. The opening does a pretty good job of getting you to not like the 2 elves you capture. They’re both kind of bitches and seeing them be bitches goes a long way towards making the breaking more enjoyable.

Overall? Definitely a fun VN. Your PC is going to have to be set to gook mode to play it but it’s worth it. Just remember. Elves exist for breeding.

2 thoughts on “Greentext Does: “Captive Market”.”