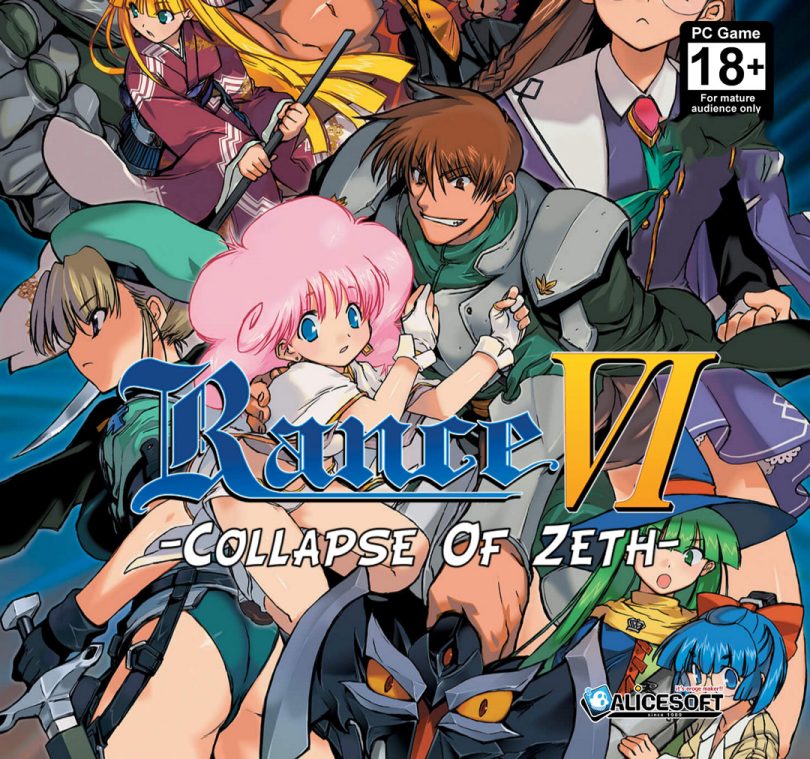 While talking with some people about my thoughts on Sengoku Rance someone told me that Rance VI was a much better game. Right after he finished saying that 5 other people bust into the conversation to inform him that he was wrong and suggest he should an hero. Then a few more people came to his defense and started telling the Sengoku Rance fans that they were wrong and that Rance VI is best Rance. Needless to say this got me interested. While we wait for the fine folks at MangaGamer to finish translating Rance Quest lets take a look at this earlier entry in the Rance series. 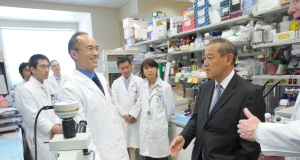 Here you can see Japanese Ambassador Ichiro Fujisaki congratulating the team at Alicesoft for their cultural achievements.

Did I mention that Rance likes to fuck things? If this is your first time hearing about a Rance game than I’ll fill you in. Rance was specifically designed by an elite team of Japanese scientists to be the polar opposite of your traditional JRPG hero. He’s greedy, stupid, snobby, violent, mean, and rapes pretty much anyone he can get his hands on. He’s also absolutely fucking hilarious. You’d think playing as a character who is designed to be unlikable would be bad but once you embrace how much of a horrible person Rance is it’s pretty enjoyable. It’s well known sequel, Sengoku Rance, had interesting mix of turn based combat and empire expanding strategy. What does Rance VI have? Just the turn based combat. Rance VI is a grid based first person dungeon crawler kind of like Dungeon master (Or The Legend Of Grimrock for you youngsters). You walk around dungeons filling out the map, collecting treasure and BP, and fighting monsters. Fights will either happen randomly as you walk around or when walking onto a red tile. Combat is your standard turn based 2 rows of 3 characters with special attacks and spells affair. Really the only difference is that every party member in this game is a frail old man who can only swing their sword a few times before they need to leave the battle and find someone to push their hemorrhoids back in. Every time you use an ability or even just get in a battle your party member looses SP. You can swap in and out party members at any point during an expedition to a dungeon but once their SP reaches 0 you won’t be able to use them until you retreat or finish the mission. This means you spend a lot of time deciding which characters to swap in and out and when to do it. “Rance will kill the boss at the end of this dungeon easily but he would also make getting to the end a breeze. I can’t choose both so when should I bring him in?” is something I ended up thinking often.

Now lets get onto my biggest complaint about the game; The UI. The UI in this game has aged about as gracefully as blackface. I know Alicesoft only recently figured out how to make a UI for human beings as opposed to Asians but seriously, it’s bad. Quickly, you have 80 buttons. Which one of them do you press for the sex? You’d think it’d be the one that says “Press for sex” but that button gives you exactly 0 sex. At least you have a whole 2 hedgehog orbs. Where did you get them though? 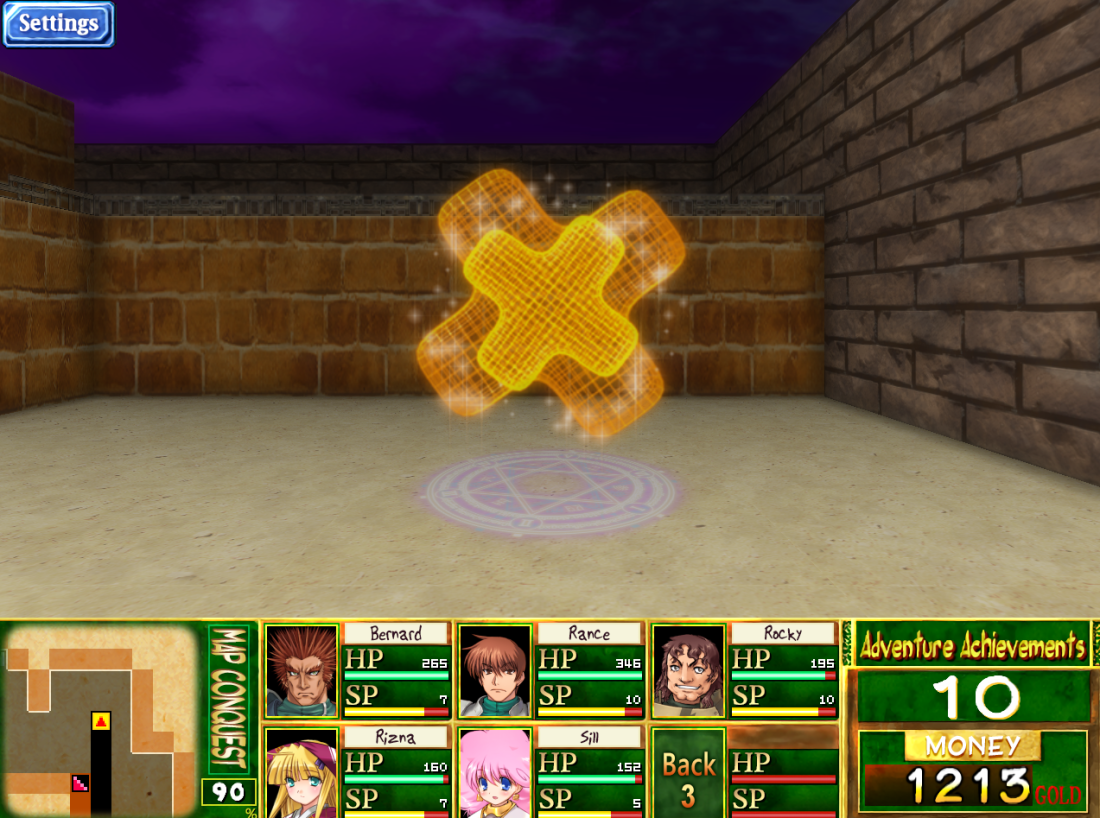 Fucking duh! You got them by collecting BP. You get hedgehog orbs at 15, 30, and 70. You either win battles for 1 or walk over the yellow X’s on the map to get 8 on your first and 5 for every subsequent. Don’t forget you can also buy orbs directly from the tiny merchant perched on top of the cardboard cutout of the girl behind the door to the left in level 2. You do know how to get purchase coupons right? If you don’t that’s fine. All this information is helpfully conveyed to you in game.

That’s a fucking lie. The game tells you almost nothing. Go on the wiki if you want to actually figure out how to play this thing. Oh! And don’t forget. You have to navigate to the “System Goddess” screen if you want to save your game because having a button labeled “Save” and “load” would be too easy.

Another problem I’ve had is that some of the random enemy formations you encounter can be vastly more difficult than others you’ll find in the same area.

This is 100% manageable. The brown guy at the bottom can be taken out in a single hit by any character. Each of the blue ones will take a turn of focused fire to bring down. No problems. This is a fucking party wipe. You’re done son. Goodbye. Turn off the game and start again. Each of those dragon looking fucks are going to take about 3 turns of focused fire before going down and the little girls they brought with will help dish out too much damage for you to handle. I understand that games will have tougher fights as you progress but these 2 fights are in the same area. You can be nearly done with a mission but “Uh-oh! The RNG Gods have decided to punish you with a fight you’re not going to be able to win”. This wouldn’t be so bad if you could save during missions or restart fights but that’s not an option. Only Rance can retreat so if he’s been KO’d or ran out of steam than every step forward becomes a gamble. Losing a battle is an instant game over and you can only save in between dungeons. Another problem is that the game gives no indication as to how close you are to being done. I could be half an hour into a dungeon, down to my last character, and have just beat what felt like the boss. If I go through that door will I end the mission or will I get in a second surprise boss fight and have to start the entire thing over? Should I retreat or keep going? It’s never clear and loosing half an hour of progress because I made the wrong choice can be frustrating.

Now, the important part. How’s the sex? It’s pretty good! An upside to Rance raping every women he meets is that you get lots and lots of sex scenes. The art is all relatively well done. It all has that cell animation look that you saw a lot in anime from the 90s. Of course there’s no actual animation. Everything is hand drawn. The game does everything right when it comes to porn though. It’ll have vastly different drawings for a scene instead of just one pose and changing facial expressions, it has hideable text boxes, and it has an option to view older scenes as just the CG’s or with the text. Some scenes can be a bit intense though. There’s a character who likes torture and the couple times you see scenes involving him there can be some gnarly looking cuts on the lady he’s screwing with. Another one that gave my inner normie a start was the one involving the “Zombie Elf” monster girl schlicking herself with her amputated arm. And this isn’t clean family friendly Skullgirls amputation. There’s blood.

Is Rance VI good? Yes! Is it as good as Sengoku Rance? No! While the time spent in between missions can be interesting the time you spend during them can usually be a relatively mindless affair. As expected of a game earlier in the series the art and gameplay is a step down from it’s sequel but having an installation process that doesn’t require a bachelors in computer science to run on an American PC and translation done by actual humans as opposed to a machine make the moment to moment experience a lot more fun. I’d definitely suggest that anyone who enjoys dungeon crawlers download Rance VI to take it for a spin.

Rance VI can be downloaded for free here. The password for the extraction is “Anasel”.

4 thoughts on “Greentext Does: Rance VI.”